MP calls for a halt to Broken Cross roundabout chaos 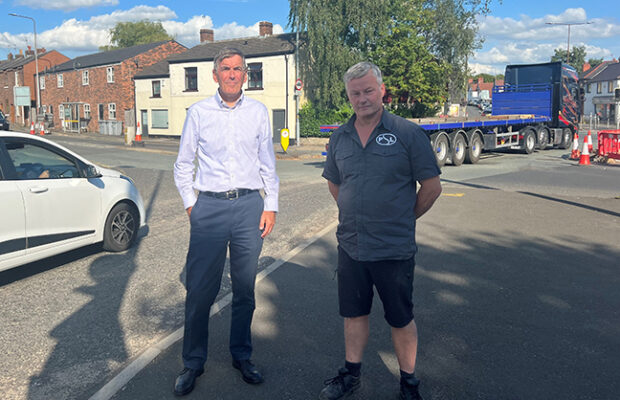 He’s calling on Cheshire East Council and Bellway Homes to end the confusion and chaos linked to replace the roundabout with traffic lights – planned to take an unbelievable 22 weeks.

When you consider the Chinese constructed a 1,300 tonne bridge in just 43 hours – the timescales for the roundabout is laughable.

Both local residents and road users are up in arms regarding the congestio  already being experienced – and likely to get a lot worse as pupils return to school today (Monday 5th September).

At a packed public meeting at Macclesfield Town Hall on Friday 2nd September, David urged the Council and the developer, Bellway Homes, to significantly improve communications and signage for both local residents and road users on plans for the roundabout. He expressed strong concerns about the pattern of poor communication linked to the related Chelford Road developments over several years. This has extended to the plans for the latest junction improvements, including the planned new permanent traffic lights, which had remained unclear to local Cheshire East Councillors, Henbury Parish Council, the MP and concerned residents, even after the works had commenced.

The MP also called on Bellway Homes and Cheshire East Council to ensure that HA Civils, the contractor for the junction improvements, delivers on the commitment to have the works manned from 7.00am to 7.00pm. When David visited the roundabout site last week, and spoke to Mr Mark Le Moignan, owner of Painters Supply paint shop located at the junction, it was clear that this commitment was not being honoured and that this was having an impact on the traffic flows at this critical junction. It is vital that the synchronisation of the traffic lights is improved as a priority.

Another key issue raised at the public meeting was air quality, particularly since Broken Cross is an Air Quality Management Area. Local residents living close to the roundabout were very worried about the impact of exhaust fumes from queues of waiting traffic on their health and also the impact on pupils walking to local schools. David pressed Cheshire East Council to take steps to more actively monitor air quality during the works, as well as after they have been completed.

The controversial housing developments on Chelford Road will eventually lead to over 300 new homes being built off this strategic highway to the west of the town, which is why the Broken Cross junction is being improved. However, since projects relating to these sites moved forward, there has been a lack of clarity and poor information about future plans, including the preliminary works, peat extraction and improvements to the junction.

After the public meeting at Macclesfield Town Hall, David said, “It’s time for Cheshire East Council to work with Bellway Homes to get a grip of the situation at the roundabout as improvements are being made over the months ahead. It was clear from the public meeting that the communications and signage are inadequate, the works are not being properly manned and that plans have not been thought through on key issues, including the location of bus stops. They urgently need to put an end to this shambles.”