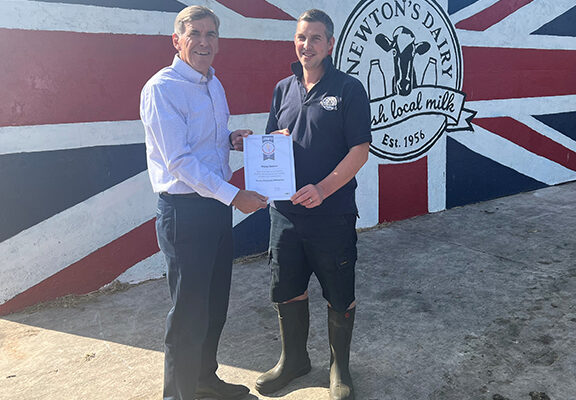 The NFU launched this new award to recognise individual farmers who play an important role in their local communities. Alongside producing food, farmers often work above and beyond in our rural communities and it is important these moments are celebrated.

Following local recommendations, David nominated Danny Newton, who runs a successful dairy farm at Trevors Close Farm, for the award. Danny has hosted numerous open events, organised on the farm, aiming to engage and educate the public, spreading the word about the world of farming and the work farmers do.

Danny’s 2022 open farm day attracted over 800 people and visitors were treated to a wealth of activities from tractor and trailer tours, to sheep shearing demonstrations, explaining why this is needed to be done, handling baby chicks and a chance to see new born calves. The event also gave the chance for Danny to provide further information on regenerative farming and how the farm is reducing their carbon footprint.

Danny is also one of the NFU North West farming ambassadors and was joined on the day by other members to answer any questions people might have, whilst free local produce such as butter and jam were available to try at the event. Danny has appeared on numerous regional news programmes speaking about issues affecting and also promoting Cheshire farming.

Speaking about the nomination, David said, “Farming is a much-valued part of the community in and around Macclesfield and I am grateful to all our local farmers for the important work they continue to do. I was pleased to nominate Danny for this award to highlight the impressive open days he has hosted and for being such a positive ambassador for farming. I wish him the best of luck as the awards progress.”