Macclesfield FC did go to Specsavers 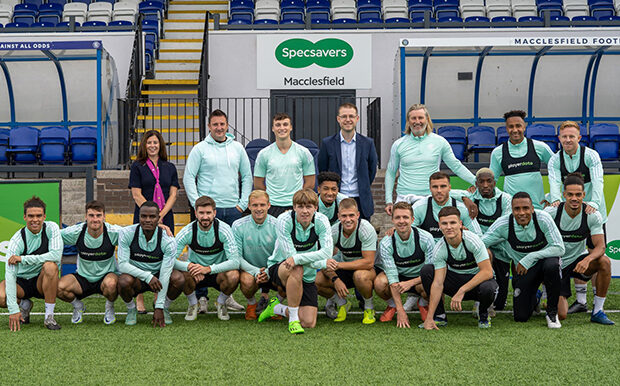 An Optician in Macclesfield has pledged over £7,200 to support Macclesfield FC, following the club’s title-winning first season.

The new season deal will see Specsavers, on Mill Street Mall in The Grosvenor Shopping Centre, sponsoring the team’s new forward, 22-year-old Neil Kengni, midfielder Max Bardsley-Rowe and right-back Jacob Hanson.  To ensure they keep their eyes on the ball and future title wins, the players will also be visiting the store to have their eyes tested.

The agreement will also see the store’s signature ‘He shoots.  He misses….. Should’ve gone to Specsavers’ advertisements featured pitch side and on the dug-out boards.

Specsavers store director, Angharad Butler adds, ‘We’re passionate about giving something back to our local community and our sponsorship of Macclesfield FC, as they rise back up the league table once again, is close to everyone’s hearts.

‘Our support of the club not only celebrates our shared love of the game but more importantly, our efforts to promote healthy living across the region.  On behalf of all store staff, we want to wish the players every success for the new season and hope that it’s as successful as the last!’ adds Specsavers store director, Dan Williams.

The club’s director of football and former professional player, Robbie Savage adds: ‘We’re delighted that such a well-known brand, with such a recognisable strapline, has pledged support for the club.  We’re confident that the deal will help to refocus the players and their eyesight for the new season ahead.’