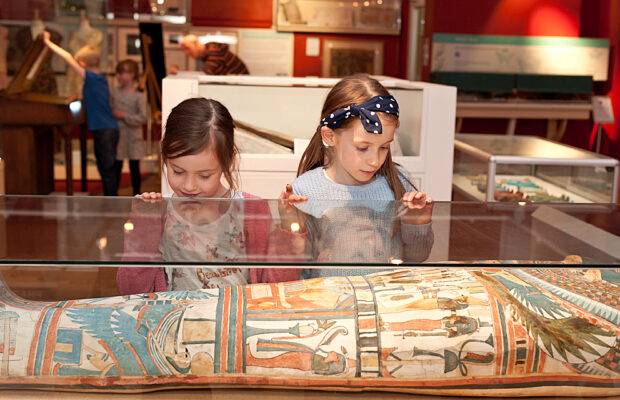 This October, the Silk Museum in Macclesfield is travelling to Ancient Egypt, looking at its historic collections, donated by English travellers and explorers Marianne Brocklehurst and Mary Booth – or the MBs as they are often known.

2022 marks the centenary of the discovery of the tomb of Tutankhamun by archaeologists under the direction of adventurer Howard Carter. This is a historic occasion and Macclesfield has its own connections with Ancient Egypt through Marianne Brocklehurst.

Marianne was the daughter of silk manufacturer John Brocklehurst, Macclesfield’s first MP. Her family’s wealth and social standing provided the resources for Marianne to travel extensively in Europe and the Middle East. In1873-74 Marianne, along with her companion Mary Booth, her nephew Alfred and servant George, made an epic voyage up the Nile. Throughout this trip Marianne kept a personal diary illustrated with lively watercolours that captured life on the Nile through the eyes of this remarkable Victorian woman.

The Silk Museum will be running a series of workshops for children in October half term from October 22 to October 29. The workshops will take inspiration from the Ancient Egyptian collections at the museum, which were donated by the MBs from their extensive travels.

Can you decipher hieroglyphics? Or perhaps you could paint with watercolours like Marianne did in her diaries? Or you could create ancient Egyptian board games such as Mehen.

Alongside the children’s workshops there will be an opportunity to journey up the Nile with the beautifully illustrated diary of Victorian adventurer, Marianne Brocklehurst. On Thursday October 27 the museum will be displaying the diary which records her travels through Egypt in the 1870s with her life partner, Mary Booth. The diary covers everything, from visits to ancient sites to how not to shoot a crocodile, all told with Marianne’s dry sense of humour.

To find out more about our programme of events for October visit the website.