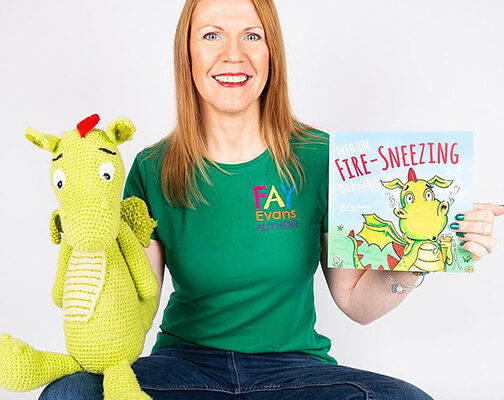 Macclesfield children’s book author, Fay Evans, who claims that John Lewis copied her dragon for its 2019 Christmas advertising campaign is suing them in a ‘David and Goliath’ legal war.

Fay, who released the self-published picture book Fred the Fire-Sneezing Dragon in September 2017, has been waging a legal battle with the John Lewis and its design advertising agency and has has her claim listed for a High Court hearing on January 30.

‘I’m feeling more confident than ever in the validity of my claim’, Fay told The Times.

John Lewis said it will ‘robustly’ defend itself against the claims, saying the concept for their advert was presented to them in early 2016 – a year and seven months before Ms Evans published her book.

The John Lewis advert, produced in partnership with sister company Waitrose, follows Edgar as his excitement about festivities in his village sees him accidentally melt the ice-rink, reduce a snowman to a puddle and set fire to a Christmas tree.

Edgar finally shuts himself away in despair, but his friend Ava encourages him to rejoin the village with the gift of a Christmas pudding, which allows him to put his fire to perfect use.

Ms Evans said: ‘When I watched the John Lewis Christmas advert for the first time back in November 2019, I was gobsmacked.

‘I couldn’t quite believe what I was seeing unfold before me. The visual resemblance to the main character in Fred the Fire-Sneezing Dragon and the narrative similarity throughout was striking.’

In a statement, John Lewis said: ‘We have always refuted and continue to refute this. We take great care and pride in the creation of our Christmas adverts.

‘Ms Evans has accepted in the court proceedings that the concept for our 2019 Christmas campaign was first presented to us in early 2016 — one year and seven months before her book was published.

‘We were not aware of Ms Evans’s book until after our ad had aired, and we are confident the claim will be dismissed.’