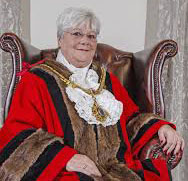 Mayor of Macclesfield, Councillor Janet Jackson has launched a new awards scheme for the many unrecognised local folk who contribute to the local community.

In Macclesfield, there are individuals who volunteer their time, efforts and expertise for the good of the community without reward or favour. And for those individuals, many of whom don’t belong to an organised body, there is often little or no recognition of their efforts.

The mayor 2015 Community Awards will recognise and celebrate people who have volunteered their time and energy to help others. The awards will be presented to the most remarkable individuals.

The eligibility criteria for the awards is straightforward. Each person must be nominated by at least two unrelated people and must have made a “significant and sustained contribution” to the Macclesfield community.

The contribution from the nominee should be solely for the benefit of the Macclesfield community.

• An account of why the nominee should be considered and what they have contributed to the community. Please no more than one side of A4,

• The name, address, email and phone number of proposer,

• The name, address, email and phone number of nominee.