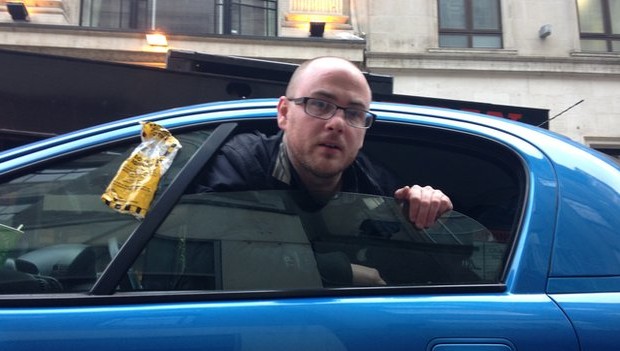 A Macclesfield man, who wrongly parked in a disabled bay in Birmingham, sat in his car for more than seven hours to stop it being towed away.

Matthew Sanders, 34, said he had spent £270 to get his car on the road and could not afford the costs if it was impounded.

“If they take it off me I haven’t got the funds to release it,” he said.

The stand-off ended at about 18:00 GMT. It was thought Mr Sanders reached an agreement with the tow company.

He said the firm, which is contracted by Birmingham City Council, had agreed not to charge him a release fee.

Mr Sanders, who said he had driven to Birmingham to pick up his friend from work, said he had “no quarrel” with being given a ticket for parking in the disabled bay.

However, he said it was his understanding there was an eight-hour grace period before a car can be towed, which was not observed.

It was “clear a mistake had been made”, he added, and urged other people to “research their rights”.

The council said the driver had parked “illegally” in the bay without a blue badge. It is believed he got back into the car after it had been put on to the tow truck.

“Disabled motorists have a right to park in designated spaces and this driver’s actions have taken a much-needed space out of action for disabled visitors to the city for an entire morning and wasted the time of officers and contractors,” a council spokeswoman said.

West Midlands Police said officers were there for a reassuring presence only and to prevent a breach of the peace.

The £70 Penalty Charge Notice (PCN) would cost £35 if paid within 14 days. However, Mr Sanders would also have faced a £105 vehicle removal fee and £12 daily charges.