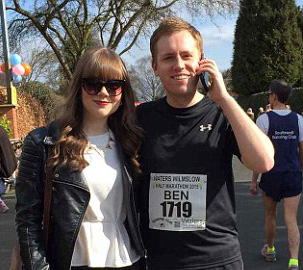 Fitness fanatic Ben Smith was pictured smiling with his ‘soul mate’ Jordan Ibsen just minutes before he entering the Wilmslow Half Marathon in Cheshire.

Described as ‘healthy and active’, the 27-year-old, had been approaching the end of the race when he suddenly fell to the ground unresponsive.

An air ambulance and paramedics rushed to the scene, but Mr Smith was pronounced dead on arrival at Wythenshawe Hospital on Sunday, March 22.

His devastated family still don’t know what killed him after a post-mortem failed to find anything abnormal.

Father Gary, 57, and mother Chris, 51, said their son had recently moved in with his teacher girlfriend Jordan, 25, in Chorlton after he landed a promotion as a sales executive.

The pair were described as ‘soul mates and best friends’ and were just setting up a life together.

Mr Smith, from Sale, said: ‘What happened to Ben is still unexplained. He was fit and healthy, had no medical conditions and was always playing sport.

‘There was a GP running behind him who said he had no pulse. He had played lacrosse his whole life and was always healthy and ate well.

‘We’ve had no answers – we’re still waiting for more tests to come back.

‘We just don’t understand why or how this happened. It was completely out of the blue. We’re devastated and Jordan is heartbroken.’

Ben, a former Altrincham Grammar School for Boys student, studied sport and leisure management at Loughborough University and was an avid cyclist and regular gym-goer.