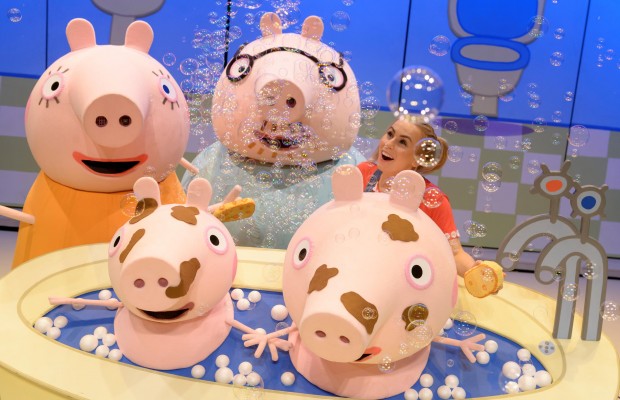 It’s a lovely day and Peppa Pig is playing outside with her friends. Mummy Pig and Daddy Pig has got a surprise for her and her younger brother George but no matter how hard they try, they cannot guess what it is. Currently one of the most popular shows on the UK and Ireland theatre touring circuit, Fiery Light’s Peppa Pig live stage show experience has now gone international with a production running in Australia and another opening in the US in autumn 2015. There are also licensed productions of the show in Spain, Italy and Latin America.

Following adaptations of Peppa Pig Live, Peppa Pig’s Party, Peppa Pig’s Treasure Hunt and Peppa’s Big Splash, Richard Lewis has once again done the adaption for this stage show. His other most recent productions aside from Peppa include Octonauts Live and Ben & Holly’s Little Kingdom.

Richard Lewis commented: ‘It hardly seems like six years since we first started on the first Peppa Pig live stage show. It’s been an incredible experience seeing the children’s reactions, not only in the UK but throughout the world and it just confirms that Peppa really is a worldwide phenomenon’

Tickets for Peppa Pig’s Surprise are priced from £16 to £20 and discounts are available. To buy tickets call Buxton Opera House on 01298 72190 or visit www.buxtonoperahoues.org.uk