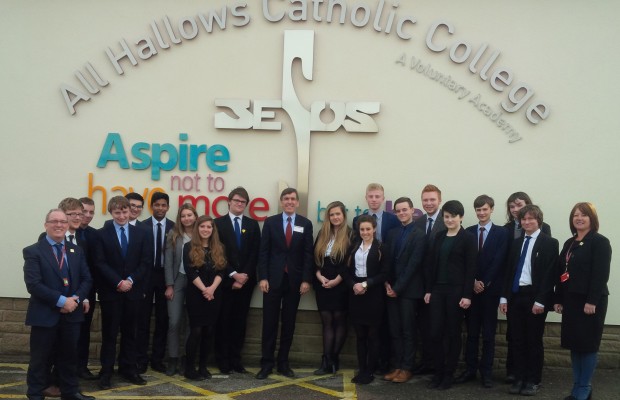 All Hallows Catholic College welcomed a special visitor recently, as Member of Parliament for Macclesfield, David Rutley, came to the school to be quizzed by sixth form students about politics and his work in Parliament.

David was invited by the College’s Principal, Tony Billings, to help enable pupils to learn more about our political system and British values, in particular. In a “Question Time” style format, David fielded questions from students, ranging from tuition fees to the upcoming EU Referendum. The students also took time to find out more about David’s work as an MP, and explained to him how their values have positively influenced their education.

All Hallows Catholic College is an all-ability Voluntary Academy for boys and girls aged 11 to 18 – serving a wide geographic area of East Cheshire – and drawing students from parts of Derbyshire, Staffordshire and Stockport. The College has had two successive top grade, ‘Outstanding’ Ofsted inspections, in April 2011 and in December 2014.

Speaking following the visit, David said, “It was great to be invited to All Hallows once again, and speak to the pupils about British politics, my work as an MP, and the significance placed upon our citizenship. I was most impressed by their questions and their views on such a wide-ranging set of issues. I look forward to continuing to keep in touch with Mr Billings and the School in the months ahead.”