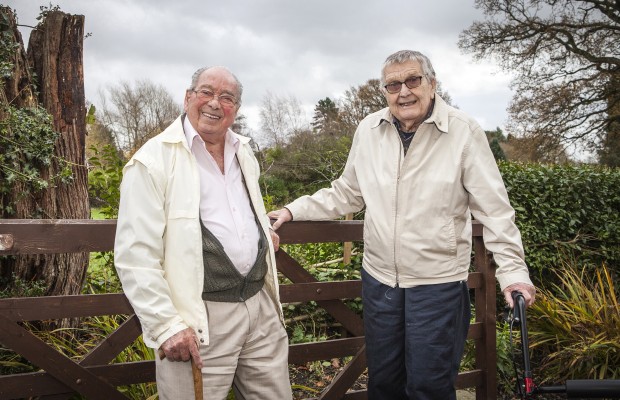 Old school friends were reunited after 70 years for an exhibition that will tell the story of Quarry Bank’s unique gardens.

Maurice Earlam and Cyril Bradley, both 91, went to school together and later worked at Norcliffe Hall and Quarry Bank House respectively.

However, neither knew they gardened within yards of one another in their 20s until they were asked to share their stories for Quarry Bank’s sound archive, which forms part of an exhibition currently on at the National Trust property.

“We were separated by a large wall at the time and never knew the other was there,” said Cyril, who lives in Wilmslow.

As children they had played together at Styal Primary School, which is still open today, but as they grew up they went their separate ways.

It was a surprise to both that they had worked so closely later in life. In the early 1900s Quarry Bank and Norcliffe Hall were owned by the Greg family, who had built the mill from which the estate developed in 1784.

The gardens served both households in the past, but became separated after 1910 when Quarry Bank House was tenanted out and a wall was built to divide them.

So, as Cyril went about his chores on one side of the brick barrier Maurice pottered on the other side dreaming of becoming a professional cricketer.

His first job had been as a paperboy in the village but, at 18, he was conscripted to serve with the South Staffordshire Regiment.

On his return he worked at Norcliffe Hall where one of his jobs was to sweep the drive every Saturday morning.

“If my dad had not objected to me playing cricket I probably would never have been there,” said Maurice.

Then he would clean the cars before starting his gardening duties.

Everything from chrysanthemums to cabbage and cauliflowers were grown in the Quarry Bank gardens as well as rows of bedding plants.

Another of Cyril’s jobs was to mow the tennis courts and that was something he looked forward to.

“I used a ride-on mower so that was a fun job for a young lad,” he said.

More of Cyril and Maurice’s memories will appear in the Unearthed exhibition alongside those of eight other people who have influenced the development of the gardens at Quarry Bank over the past 200 years.