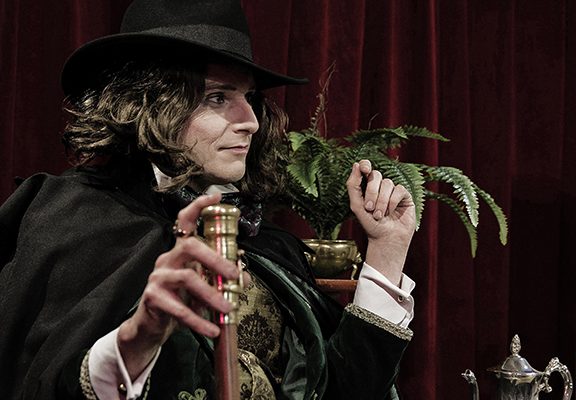 If you’ve ever wondered what it would be like to live in the Victorian age, a new drama Tea with Oscar Wilde has reimagine the modern chat show for the 19th century.

Packed with gossip, song and humour, this light-hearted performance invites the audience to experience the 1890’s wittiest “chit-chat” show. Hosted by the acclaimed wit of the era, Oscar Wilde, the show follows the now familiar format where guests include a selection of some of the celebrities of the day, together with plenty of audience interaction… and maybe cucumber sandwiches & Pimm’s! There is plenty more drama to come during the month of August. Talking Scarlet will be in residency at Buxton Opera House and Pavilion Arts Centre with three chilling productions: Death Toll (11-13 Aug) Jekyll and Hyde (15-19 Aug) and a Murder Mystery Evening (14 Aug). Whilst children can look forward to a musical adaptation of Wind in the Willows (8-10 Aug).

For those that love big budget films, Hollywood Special Effects (14 Aug) with reveal the scientific secrets to the movie magic we see on screen.

Tea With Oscar Wilde takes place on Thursday 4 August at 7.30pm in the Pavilion Arts Centre. Tickets are priced at £16 and discounts are available. To buy tickets or for more information on other events call the box office on 01298 72190 or visit the Box Office www.buxtonoperahouse.org.uk