MP rolls out the first bowl 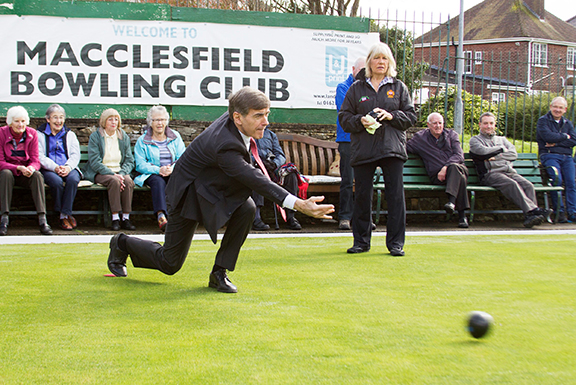 Joined by the President of Macclesfield Bowling Club, Sue Munslow, and Club members, David Rutley, MP for Macclesfield, rolled out the first jack and bowl of the new season to formally open the Club’s green.

At the opening, which took place on 12th March, Ms Munslow outlined to David the enormous support that exists within the Club for events on the green. David was also told about the recent improvements to Club facilities that were made by the dedicated maintenance team, which had installed white boarding around the green and extended the veranda. The veranda was constructed over the winter in memory of Kitty Jackson, a keen supporter of the Club. The Club has also been able to install new floodlights following a large donation last year. Fellowship and the welcoming of new members are also seen as important by the Club’s membership, and Ms Helen Hibbert was nominated as the Sports Person of the Year for the huge support she gives to all the members and teams in the Club, attending matches, marking cards, baking cakes and bowling at social functions.

Social bowling and league bowling are vital for the Club, which hosts Open Competitions throughout the season as well as a number of Club Vets Cup competitions. Anyone interested in joining the Club should ring 01625 409052 for details.

Following the opening David said: “It was a pleasure to once again join members of the Macclesfield Bowling Club at the start of the season. Their warm welcome and the sense of community that has been created at the Club are impressive. I wish the membership the best of luck for the season ahead.”