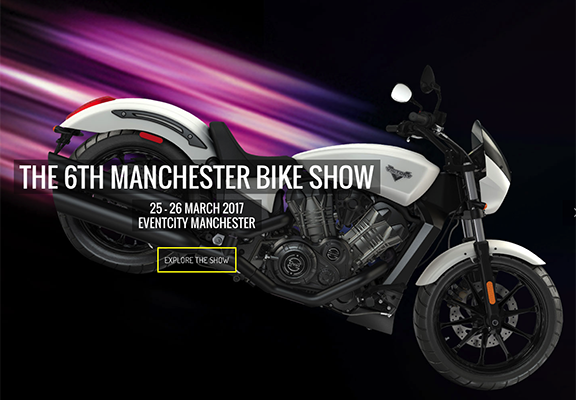 EventCity, Next to the intu Trafford Centre, Manchester, M41 7TB

For the sixth successful year the number one event in the North of England catering for the motorcycle industry will be back at EventCity, Manchester on Saturday 25th & 26th March 2017. Over the last five years the Manchester Bike Show has doubled in size to a massive 22,000 sq m and with over 1,000 bikes on display is now the biggest and best indoor motorcycle show in the North of England.

The stunning fully carpeted Hall 4 will showcase brand new 2017 models from major manufacturers including Suzuki, Honda, Kawasaki, Yamaha, Triumph, Ducati, Harley Davidson, KTM, Royal Enfield and Benelli. As always there will be exclusive show offers from many of the manufacturers and dealers if you are looking to upgrade your current machine. Also new for 2017 will be an auction run by The Motorcycle Auction Ltd at noon on both days where you can enter your motorcycle for sale or indeed grab a nearly new bargain. For further details contact brian@themotorcycleauction.com

Hall 3 hosts the Northern Classic Bike Show featuring a stunning display of over 600 modern, race, classic, dirt bike and street fighter machines from clubs and private individuals all competing for Bike of the Show in the Vulcanet Concours. In addition there will be a dedicated racing area organised by the governing body of motorcycle sport in the UK, the ACU. The represents a real chance to get up close to the bikes currently competing in regional, national and world championship race series.

EventCity also delivers an unrivalled retail village with leathers, helmets, accessories, parts, touring companies and services so make sure that you grab a bargain while you are at the show. Not forgetting to mention a live stage sponsored by Vulcanet with star guests, live music, competitions all compared by our MC Les Clayton. Finally don’t miss the thrilling thrice daily stunt shows provided by the Xtreme Stunt Team.

EventCity really is the place to be on 25th & 26th March if you are serious about motorcycling.

WHAT THE PARTICIPANTS SAID IN 2016:

“Just to a quick email to say thanks for such a fantastic show again this year! We did well with bike sales and clothing.” Martin Bridgehouse, General Manager, Ducati Manchester. By email

“Thanks for all your help. Keep pushing – you’re doing a great job of making a great northern England bike show!” Clive Rumbold, Moto Scotland. By email.

“Can I congratulate you on a splendid 2016 Manchester Bike Show. The organisation was first class and it was very pleasing to see so many people there. Everyone involved with our stand enjoyed themselves and voted it the best show yet.” John Booth, LE Velocette Stand. By email

SAVE MONEY BY BUYING YOUR TICKETS IN ADVANCE FROM WWW.MANCHESTERBIKESHOW.COM/BUY-TICKETS
Advance tickets are available to buy until 11.55pm on Thursday 23rd March 2017.
Tickets are valid for entry on one day only, either Saturday 25th or Sunday 26th March.