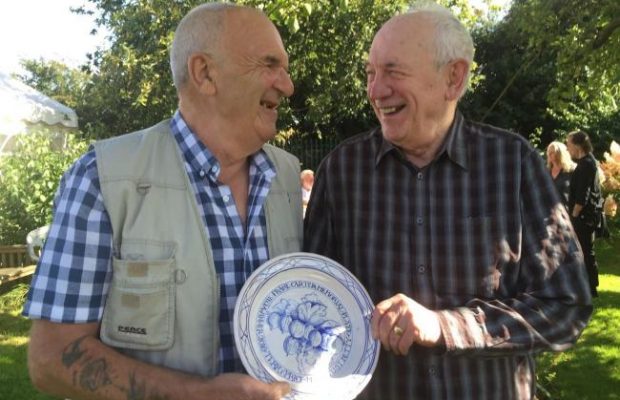 The Dunkirk spirit will be needed by rival growers poised this week for the annual battle of the bushes as gooseberries come under attack from a combined force of weather, disease and pests, writes John Williams.

Only several weeks ago all looked well as the fruit ripened and grew gently under their protective netting for the Mid Cheshire shows beginning on Saturday.

But fickle weather, blowing hot and cold and late season torrents of rain, is doing its best to dampen the prospect of weighing in with a harvest of world-beating berries. Now, it will be a case of standing firm and be saving the best from the trees before they burst.

Terry Price, Goostrey Gooseberry Society’s current champion and show President, says reports suggest that all growers in the area are struggling to keep berries on the bushes. “I don’t think there will be any records this year,” says Terry. “They are busting all over and the heavy rain is finishing off a lot.”

Terry, whose Just Betty gooseberry of 24 pennyweights and 22 grains, won the show at The Crown Inn last year, is hoping for a better result this time. Several weeks ago a berry from the same tree weighed 30 pennyweights but now like other growers the prospect doesn’t look good.

He added: “I think if someone can hold on to a berry of 28 pennyweights it is likely to be the heaviest in our show or any other. They are all struggling”

Best of the bunch is expected to be among yellow berry varieties such as Woodpecker, Millenium or Montrose. Later shows in August may have the smallest berries of the year to put on the scales for the annual heavyweight whopper. And the overall champion in the fiercely-fought contests might be decided by a whisker!

Visitors are welcome to watch the Goostrey Gooseberry Show – as all other shows – at The Crown starting on Saturday at 1 pm.

A Junior Show won last year by Joe Banks Williams, eight, is again open to all under 16-year-olds who live in Goostrey and the surrounding area.

His winning Woodpecker berry weighed 16 pennyweights and five grains. A prize draw on the day includes dinner for two at the Yellow Broom, Twemlow Green.

The world record berry is a Millenium of 41 pennyweights 11 grains grown in 2013 by Kelvin Archer, a member of the Marton and Lower Withington shows.