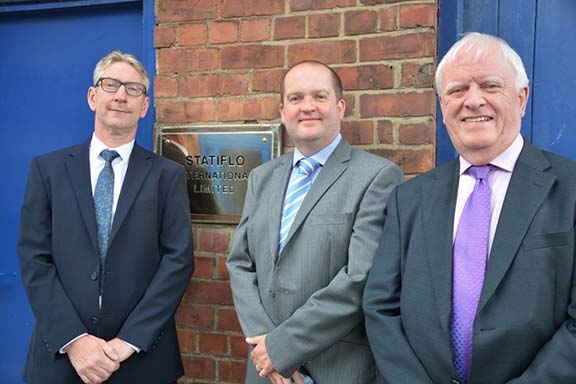 Paul has taken on a wider role as financial controller of Statiflo Group, which includes the company’s subsidiaries in the United States and Germany.

Statiflo is a world leader in the design and distribution of static mixers and other chemical process equipment. It supplies the water and wastewater treatment industries, oil and gas, petrochemical, food, pharmaceutical, pulp and paper sectors.

Its products are used in more than 80 countries and the group has annual revenues of more than £5m. It employs 24 staff.

In 2016, managing director Gareth Fry acquired a majority stake in the business from founder John Baron, who set up the business in a spare bedroom at his Wilmslow home in 1983.

Patrick’s retirement brings down the curtain on an accountancy career which began in 1966 as an articled clerk at a firm in the West End of London earning £10 a week.

He has worked in listed, privately-owned and employee-owned companies and in the not-for-profit sector, and has been involved in numerous mergers, turnarounds and disposals.

“I’ve had a great career with plenty of variety. Accountancy is a very transferable skill,” he said.

He is married with three daughters and four grandsons.

Mr Fry said: “Patrick has been a great asset to the business, in particular the support he gave to John and I during the buyout process.

“He has been a rock of stability throughout his time with us and has remained in post to ensure a smooth handover to Paul. We are hugely grateful to him and wish him all the very best in his retirement.”

He added: “Paul is an experienced senior finance professional with a Big Four background followed by a career in multi-site international businesses. He has tremendous financial knowledge and understanding, along with great commercial acumen, and he is a fantastic fit for Statiflo.”