Lancaster to fly over Derwent reservoir 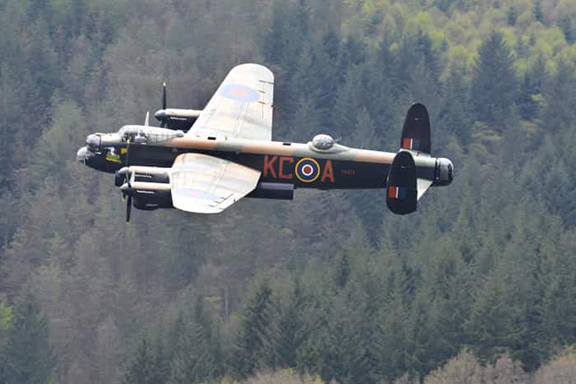 A Lancaster bomber will be flying over the Peak District next week.

The legendary aircraft takes off from RAF Scampton, in Lincolnshire, appearing over the Derwent Dam (where the original Dambuster crews trained in low-level bombing runs) at around 12.05pm and down the Derwent Valley over Chatsworth, before heading to Rolls Royce in Derby and onwards to the Eyebrook Reservoir in Leicestershire.

Measures will be in place to help keep traffic flowing in the Ladybower area – which attracted around 10,000 spectators during the last fly-past in 2014.

Roads are likely to be very congested and some routes will be closed altogether.

Road closure
There will be a full road closure on Derwent Lane with three-way temporary traffic signals in place at the A57 junction (manually controlled in peak times). Traffic will not be allowed into Derwent Lane, from the A57, between 12 noon to 3pm (at the earliest).

A mandatory temporary 20mph speed limit will be in place along the A57 (West of Cutthroat Bridge for 2.6 miles).

Derwent Lane will have single file parking along the South bound carriageway only, when the car parks are full. There will be traffic operatives in place to direct traffic in four sections to control the flow of traffic. There will be three no passing points in place for emergency vehicles on Derwent Lane

Hagg Barn car park will be signed for motorcycles only

New Road, Bamford will become a one way (West bound only); this will be all day unless otherwise signed

Lydgate Lane, Carr Lane and Thornhill Lane will also will become a one way (West/Southerly direction); this will be all day unless otherwise signed. This creates an anti-clockwise gyratory with the A6013 in the middle.

No parking areas (cones and signage at various points on the A57/A6013 /Bamford village) will be identified and enforced by Police and Civil Enforcement Officers.

The emergency planning event control will be located at Heatherdene car park.

Police will provide four motorcycle officers to patrol the A57 and A6013 and parking enforcement officers will be on the route at various points.

Highways England are also being asked to sign this event on the variable message signs on their roads subject to their procedures. The aim is to get passing traffic to take a different route.

It’s anticipated that traffic restrictions will be lifted by 4pm.

Share this...
Related Items
← Previous Story Art by those with learning disabilities
Next Story → Silkmen and their fans celebrate