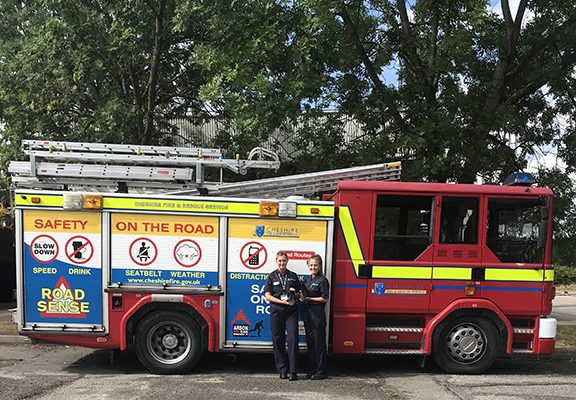 Above: Apprentice firefighter Olivia Lovatt from Biddulph in Staffordshire is working with Ellie to co-ordinate the tournament.

With the World Cup now over Cheshire Fire Apprentices are hosting a six-a-side tournament to help raise money for a Nepal School build project, and are asking for local businesses and players to get involved.

Cheshire Fire Apprentice Charity Football Tournament and Family Fun Day takes place on Sunday, August 26 at The Winsford Academy, Grange Lane, Winsford from 11am-4pm. Teams of six players plus subs are wanted and it costs £10 per player to take part.

Cheshire Fire Apprentice and tournament co-ordinator Ellie Ditchfield, from Preston, said: “Find yourself a team of six, sign up, and come down for a great day of football. Your team will be in with a chance to be crowned Cheshire Fire Tournament Champions 2018.”

The tournament is open to over 18s only and teams can be mixed, but must be booked to play in advance. Trophies and medals are available for the winning team.

Ellie added: “We are raising money to build a village school for young people in Nepal so need to raise £30,000 for the project. I play football regularly so thought it would be a great idea to get teams from local businesses to play against each other in a tournament which will include a few fighter teams.

“If there are people out there that would like to play, but don’t have people to join their team then they can also get in touch and I may be able to find them a team. We are also incorporating a free family fun day into the event, so there will be lots for people of all ages to do on the day.”

On the day there will also be stalls, face painting, modern and vintage fire engines and refreshments will be available to buy. Admission is free to the fun day and  all children must be accompanied by an adult.

Apprentice firefighter Olivia Lovatt from Biddulph in Staffordshire is working with Ellie to co-ordinate the tournament.

Contact Ellie Ditchfield on 07446 152715 to book a team into the tournament or email: ellie.ditchfield@cheshirefire.gov.uk

Share this...
Related Items
← Previous Story Blown away by the Illegal Eagles
Next Story → Were you in Congleton town centre on Friday?