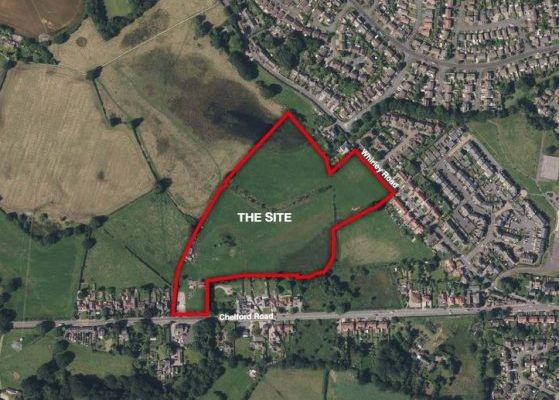 Above: Frederic Robinsons’ plans are for 135 houses opposite the Cock Inn on Chelford Road, Henbury

Both proposals are in Henbury, Macclesfield – one by Jones Homes and Redrow and the other by Frederic Robinson – were both given backing by Cheshire East councillors at the meeting on 4 September, in line with officer recommendation. Each of the schemes had been previously withdrawn from planning committee agendas in March and April, which Cheshire East’s head of planning said was due to “a possible issue in terms of pedestrian facilities at a proposed junction”.

Jones and Redrow’s plans include 233 homes south of Chelford Road, while Frederic Robinsons’ feature 135 houses opposite the Cock Inn to the north of the same road. Both have proved controversial, with Henbury Parish Council, Macclesfield Town Council, and local residents’ groups raising a series of issues including air quality and traffic issues.

Although both sites are allocated for housing under Cheshire East’s Local Plan, Henbury Parish Council, one of the scheme’s main objectors, argued previously-raised issues, including the pedestrian facilities cited as a reason for withdrawal, had not been addressed. As a result, the council has continued to object based on air quality, site access, flooding, traffic, and a lack of school places, while the group has argued the data used to support the application is “deeply flawed”.

The parish council also raised issues around air quality, after Broken Cross was officially declared an AQMA in October 2017. To date, no air quality monitoring action plan has been put in place by Cheshire East council. In its objection to the scheme, Henbury Council said the transport assessment was “misleading”, “blatantly ignored valid information” and “is based on non-representative traffic and pedestrian flows”. Henbury Parish Council’s objections had been supported by local residents and the Save Macclesfield Green Belt Group; in a joint statement, the parties said they were “not against well planned sustainable development that does not negatively impact neighbours, air quality, safety, or the environment”.

A joint statement also argued that peat extraction would be necessary to make both sites developable; this, the groups said, would be contrary to Cheshire East’s Local Plan.

Macclesfield MP, David Rutley, had also signalled his opposition for the plans in calling for a “thorough review” of both projects.

Despite this, both schemes were approved at committee, subject to a Section 106 agreement, with campaigners claiming that issues around air quality and traffic were “completely ignored”.

Gary Halman from GVA HOW Planning, who advised on the sites, said: “We are absolutely delighted with this result. Cheshire East and Macclesfield in particular, urgently need new homes and investment. Realising high quality development on allocated sites such as these is critical to the council’s forward land supply. Jones Homes, Redrow and Frederic Robinson’s have put plans forward for high quality schemes, which can now deliver almost 400 open market and affordable homes for local families in a desirable and accessible setting.”

While the planning office’s report to committee admitted that “taking into account the uncertainties with modelling, the impacts of the development could be significantly worse than predicted”; however, it added the proposals “will not have a detrimental impact on the air quality of the area as any impacts will be mitigated against”.

“Based on the principles shown on the indicative layout, the proposal would not materially harm neighbouring residential amenity and would provide sufficient amenity for the new occupants,” the report continued. Cheshire East is currently able to demonstrate a five-year supply of housing; however, these proposals will make a valuable contribution in maintaining this position.”

Share this...
Related Items
← Previous Story HS2 faces a 12 month delay
Next Story → Improve your options with The Prince’s Trust