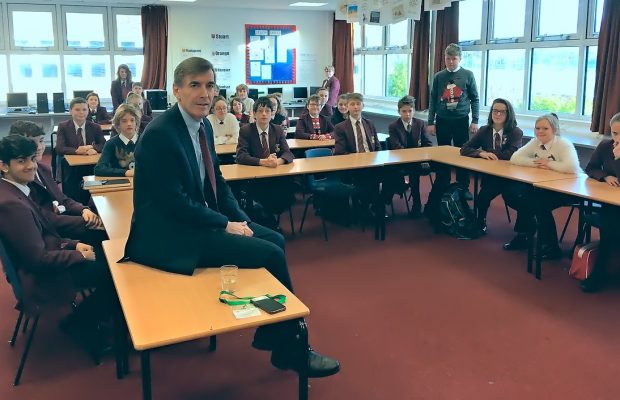 In the final event of Tytherington High School’s Parliament Week programme, local MP, David Rutley was invited to take part in a question-and-answer with students about the role of Parliament and the work of MPs.

David addressed a specially-organised group of students, aged between 11 and 18, and was asked a range of questions by them on a wide range of local and national issues, including the UK’s withdrawal from the EU, the voting age, and the Party system. He also explained more about his work representing Macclesfield locally and in Parliament, and highlighted why it is so important for everyone in our country, whatever their age, to engage with our democratic institutions.

Tytherington High School has held a number of events over the past fortnight to celebrate Parliament Week, including visits from MPs, a workshop for primary school student councils, and a local council Question Time. First held in 2010, Parliament Week is an annual event organised by the UK Parliament, which aims to engage people of all ages, and from across diverse communities, with Parliament, encouraging them to become more well-informed citizens as a result. Whilst Parliament Week is not age-specific, it aims to reach out and engage with younger people, in particular.

Headteacher of Tytherington High School, Manny Botwe, said: “We are delighted that David Rutley came to visit the school as part of our Parliament week. He is a keen supporter of the school and we are grateful for his regular sessions with our Student Parliament.”

Speaking after his visit, David said, “It was great to see Tytherington High School participating in UK Parliament week. As their well-put and impressive questions demonstrated, the students from Tytherington High School were clearly engaged with many important issues and current affairs more generally. I look forward to visiting the school again in the future.”