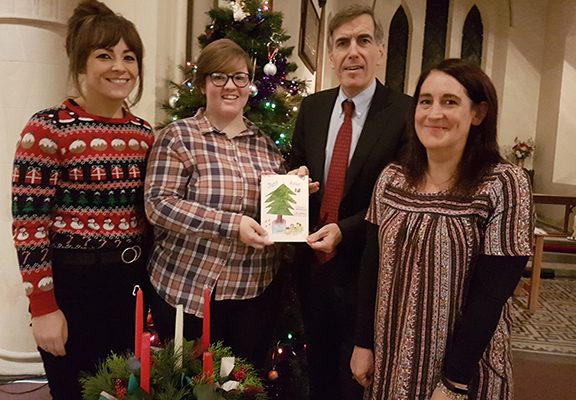 Member of Parliament for Macclesfield, David Rutley, visited local charity, Just Drop-In, to thank one of its service users for designing the Christmas image that features on his Parliamentary Christmas card.

Sophie Cooke produced a traditional Christmas tree scene which will appear on the front of the card, whilst her fellow Just Drop-In attendee, Daniella Brooks, designed the gingerbread sprinter that will feature on the back of the card.  Their festive designs are being sent to hundreds of recipients in the run-up to the big day, including local residents and civic leaders, schools, and many Government Ministers and other Parliamentarians.

David thanked Sophie for the use of her artwork, and wished all at the charity a Happy Christmas. He also heard directly from Sophie about her positive experiences of the wide range of support services available for local young people at Just Drop-In, which include counselling, workshops to help build life skills, and the provision of many fun and social activities.

Following the presentation, David joined volunteers, staff and service users at St Peter’s Church in Macclesfield for the charity’s annual carol service. The service featured traditional carols and songs, and a number of the young people who use Just Drop-In’s services took part in the festive occasion.