Gradus mill to be demolished 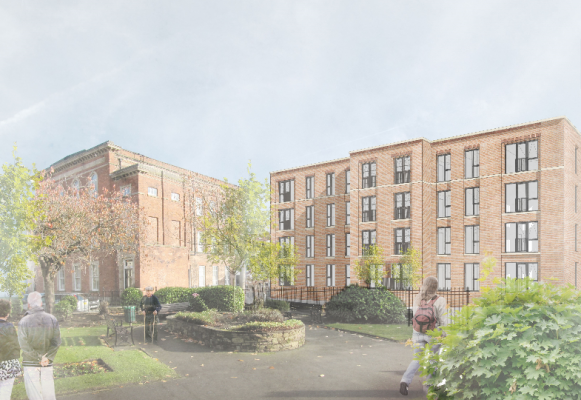 Peaks & Plains will soon commence the demolition of the derelict mills at Park Green – to make way for a new 67-apartment development.

The Georgian mill buildings – originally built by W. Frost and Sons, more recently home to Gradus Ltd, have been derelict since being damaged by a fire in 2011. The site sits next to Throwsters Court, an earlier Peaks & Plains development.

Peaks & Plains has now brought contractor Rowlinson on board to demolish the buildings, starting later this month and due to complete by the end of June this year. The mills will be replaced with brick-clad apartment blocks, including a mix of one, two, and three-bed homes both for sale and for rent. Designed by architect Pozzoni, the scheme also includes external and internal communal space.

Tim Pinder, chief executive at Peaks & Plains Housing Trust, said: “The derelict buildings on this brownfield site have been an imposing landmark when approaching the town from Silk Road and a sad reminder of the fire that destroyed it. As a Trust we are extremely committed to the regeneration of Macclesfield town centre by encouraging more people to live there. We will start the demolition of Georgian Mill over the next couple of weeks, taking the first steps in building a positive new future for the site and making a start on growing the town centre’s population by providing high-quality, affordable homes.”