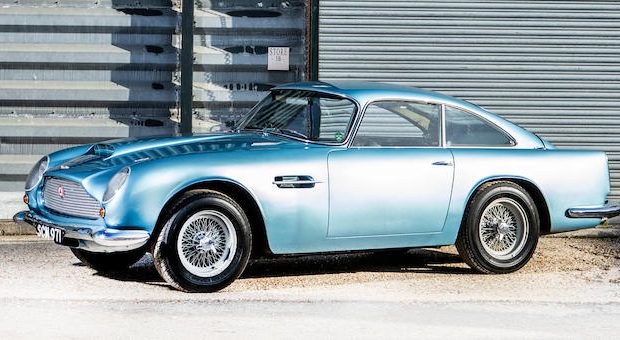 If you’re a petrolhead – and have a spare few millions to hand – you’ll be interested in this part of international racing and Macclesfield history.

This stunning 1961 Aston Martin DB4GT ‘Lightweight’ 4.2-Litre Sports Saloon will be coming up for auction next week – and is estimated to sell for between £2 – £3 million!

The car was registered on 17th January 1961 and sold on 9th February ’61 to Ernest Scragg & Sons Ltd. The Aston was initially registered ‘237 SPL’ and the DB4GT was raced by Scragg’s Managing Director, Phil Scragg, a circuit-racing star of the early 1950s. Phil would go on to become even better known as a hill climb racer during the 1960s.

During the 1970’s Ernest Scragg’s textile machinery empire, based on Sunderland Street in Macclesfield and later Langley, was one of Macclesfield’s largest employers.

Phil Scragg died in 1974, competing in a sprint meeting on the Silverstone circuit. He spun his V12 E-type backwards into the bank at Stowe. In a strange twist Phil’s 20-year-old son died only hours later at the wheel of his Ferrari in a road accident.

For many Aston Martin enthusiasts the DB4 was the best of the post-war cars. Launched at the London Motor Show in 1958, the Aston Martin DB4 demonstrated that a British manufacturer could better the Italians at their own game when it came to constructing the ultimate Gran Turismo. Its specification included a completely new steel platform chassis with disc brakes all round, and a race-developed twin-cam six-cylinder engine, all clothed in a perfectly proportioned aluminium body designed by Carrozzeria Touring of Milan. Overall, the DB4 was state-of-the-art for its time, a masterpiece of robust British engineering combined with exquisite Italian styling.

The new car’s competition potential had been recognised from the outset and the factory lost no time in developing a lightweight version suitable for racing, the resulting DB4GT debuting at the 1959 London Motor Show. The model had already been proven in competition earlier that year when the prototype driven by Stirling Moss (‘DP/199’) won its first race at Silverstone. Extensive modifications to the standard car took 5″ out of the wheelbase and replaced the rear seats with a luggage platform on all but a small number of cars. Together with lighter, 18-gauge bodywork, these changes reduced the car’s weight by around 200lb (91kg).

The GT used a tuned engine which, equipped with a twin-plug cylinder head and triple Weber 45DCOE carburettors, produced a claimed 302bhp at 6,000rpm, a useful increase over the standard car’s claimed 240bhp. Maximum speed, of course, depended on overall gearing but 153mph was achieved during testing with a 0-60mph time of 6.1 seconds recorded. The DB4 was also one of the first cars to go from standstill to 100mph and then brake to a dead stop on under 20 seconds, a tribute, in part, to its up-rated Girling brakes as used on Aston Martin’s sports racers of the era.

Driven by the likes of Roy Salvadori, Stirling Moss, Jim Clark, and Innes Ireland, the DB4GT earned its stripes every weekend on the racing circuit. In December 1959, at the Bahamas Speed Week, Stirling Moss won driving a standard customer DB4GT ‘borrowed’ by the works following the demise of Moss’s intended DBR2! The DB4GT was indeed a true dual-purpose car, equally at ease on both the racetrack and Grand Tour.

If you fancy owning a piece of automotive history check out the car’s full spec at https://www.bonhams.com/auctions/25502/