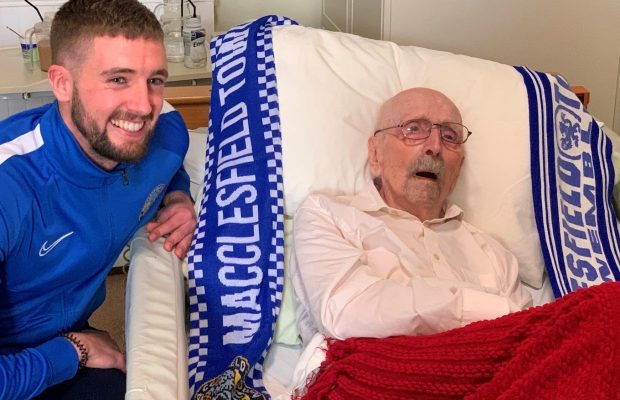 Every so often, you experience an event which genuinely moves you emotionally.

That was the case for Silkmen skipper Fiacre Kelleher and Media Manager Bob Trafford when they surprised lifelong supporter Frank Rathbone at Mount Hall Care Home.

The club received an email from Care Home Manager, Charlie Harrison advising that Frank is due to celebrate his hundredth birthday in the not to distant future. Realising that Frank had followed the club since the mid- 1920’s, the club were keen to get involved in his celebrations and make them a little extra special.

Given that Frank is a little too frail to go to the Moss Rose (despite his frequent protestations to the nurses!), it was decided the club would surprise him with some birthday gifts – courtesy of Fiacre himself. Frank had no idea what was in store and as both Fiacre and Bob entered his room, the first thing which was clearly visible was a proudly displayed scarf from the Silkmen’s Wembley triumph of 1970.

After ninety-six years of devoted support, Macclesfield Town still means the world to Frank and the visible emotion he showed when talking about some of his wonderful memories was incredibly moving to all that were privileged to listen to them. Frank spoke about many of wonderful memories – including how he started supporting the club, trips to Wembley and how were were robbed at Fulham!

Fiacre promised Frank that he and all the squad would be working hard ahead of Saturday’s game and if maximum points were achieved, then they would be for him.

Care Home Manager, Charlie Harrison said: “We are so grateful to both Fiacre and Bob for their visit today. What a wonderful surprise it was for Frank as we celebrated his hundredth year.”

“As a lifelong fan it clearly meant the world to him and all of us at Mount Hall Care Home. We were so happy that MTFC volunteered their time to make Frank’s day such a special one. He is over the moon with his new scarf, team picture and mug which were lovely gestures.”

“Frank said that he has had a marvellous day!”

Skipper Fiacre Kelleher added to this with the following: “It was such an incredible honour to go and visit Frank today. Just the look on his face when we walked in his room will stay with me forever.  You really can’t put that sort of experience into words and I felt truly humbled by it all.”

“Along with all the rest of the lads, I really do wish Frank a very happy hundredth birthday and it was an absolute honour to be a part of his celebrations.”

The last word of course, should go to Frank – with whose message to the skipper was “Thank you so, so much for coming – now go out there and win on Saturday for me!”