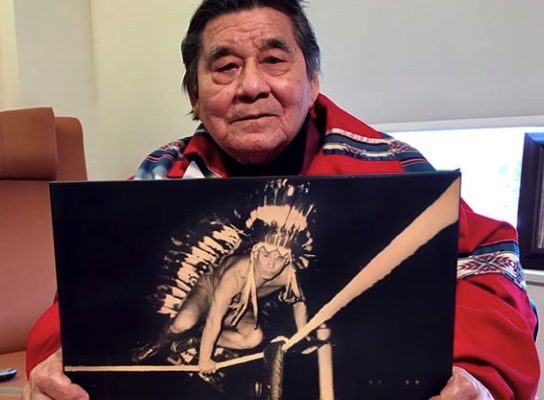 Doug Pickford shares this story of the Grunt and Groan days of World of Sport’s popular weekly wrestling phenomena. He originally wrote it for a wrestling magazine.

It was almost a fantasy fulfilled – but not quite. Early morning in a pub with wrestling legend Abe Ginsberg and the worldwide superhero of World of Sport and beyond, Billy Two Rivers. A pipe dream for any grapple fan, but this was beyond even Whispering Kent Walton’s worst nightmare.

Back in the mid 80s I was editor of a local newspaper, the Macclesfield Express, and I heard rumours of the famous wrestler Billy Two Rivers living in the town with a lady. Not the likeliest of scenarios, especially since Billy was a respected family guy who would never cheat on his wife, and living in Canada had probably never even heard of this Cheshire mill town.

Anyway, it was worth looking into so, on hearing he frequented a boozer called the White Swan, I sacrificed myself and frequented the hostelry… in the line of duty of course. Well, someone had to.

He wasn’t there. But the landlady was pleased, nay over the moon, to tell me that the one and only Billy off the telly came in almost every day and sat in the chair in the corner, regaling the star-struck locals with tales of the four-sided ring.

‘Do you think he would mind talking to the local paper?’ I asked her.

‘Shouldn’t see why not, he talks to everyone else’ was her reply.

Arrangements were made for her to inform him of my visit, and that a photographer and reporter would speak to him at the pub the following day.

All went well. Gary, a young sports reporter, was dispatched and came back with a great story and great photo images of the gent complete with a Native American head-dress and drinking a pint.

It was a weekly newspaper and so it was a few days before the story appeared complete with ‘Billy’ in his Mohawk gear and Gary’s interview.

The trouble was, this guy was a fake, although he was the spitting image of the real wrestler.

I’d barely arrived in the office that morning before the phone rang.

Outside the ring Peter Abe Ginsberg was known as a kind, generous man, a local businessman and antiques dealer, but inside the ring his persona changed. He was brutality personified.

‘Who the bloody hell is this guy who says he’s Billy? He’s a fake, and I’m going to sort him out. Billy is a great mate of mine with a lovely wife and family and I’m going to do my very good pal a favour by stopping this shyster once and for all.’

He asked where the White Lion was and, sensing an even better story, I offered to pick him up at his home in Prestburyand take him to it. Prestbury was, and is, home to many A-list footballers and TV people, and his lavishly-furnished home reflected his business and his wealth.

So we went with Abe to the cobbled street of terraced houses where the White Swan was, which could have passed for Coronation Street, and accompanied by a photographer and young Gary, we walked in.

There was Billy’s doppelgänger holding forth at the end of the bar, without a headdress but with a circle of admirers who had read the story.

Abe set eyes on him and shot across like a whippet from the stalls to come face to face.

Many expletives followed and then it kicked off. Not between the wrestler and the would-be wrestler but locals who had become friends with this Canadian Indian who were shouting and pushing the Bad Boy of the Ring, wanting him to leave the imposter alone as ‘he hadn’t done any harm.’

But they didn’t reckon on Abe’s stage presence, acquired through spending many years in the business.

They soon calmed down when they realised their superstar drinking pal was not only a fake but someone who could do great personal damage by his lies.

The outcome? As far as I am aware this chap never pretended to be the superstar again and Abe became a star in the White Swan.