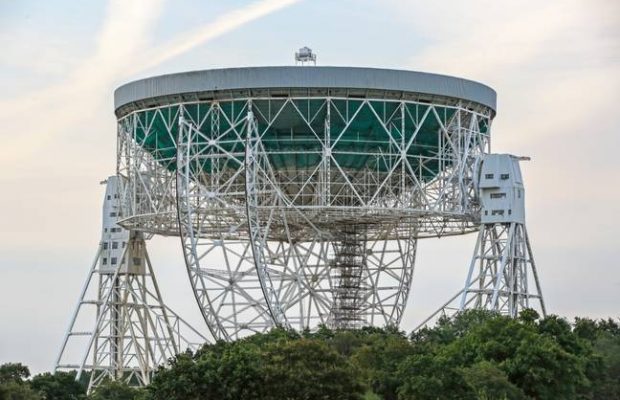 The mysterious pattern of fast radio bursts from deep space has returned right on time, as predicted by astronomers.

An international team led by astronomers at Jodrell Bank Observatory, have been carrying out a four-year ‘observing campaign’ using the Lovell Telescope.

Using these 32 bursts that were discovered during the campaign, along with data from previously published observations, a team of researchers at the University of Manchester (M.U.) discovered that the emission from the FRB known as 121102 follows a cyclic pattern.

Back in June, they announced that the radio bursts were observed in a window lasting approximately 90 days, followed by a silent period of 67 days – with the same pattern then repeating every 157 days.

This led to the prediction that it would return at some point in July or August – and they were right. The short but intense pulses of radio waves were detected by new observations of the burst’s source this month.

The existence of FRBs was only discovered in 2007, and was initially thought to be a one-off event related to a cataclysmic activity, such as an exploding star.

This idea partly changed once FRB 121102 – which was originally discovered with the Arecibo radio telescope in November 2012 – was found to repeat in 2016.

But it wasn’t until this year that the bursts were recognised as being organised in a regular pattern, with researchers from M.U. predicting they could be coming from a black hole or some other large-scale cosmic phenomenon.

Another potential explanation offered up by experts include periodic flare-ups caused by a wobble in the rotational axis of a highly magnetised neutron star.

Kaustubh Rajwade of M.U., who led the new research, said in June: “This is an exciting result as it is only the second system where we believe we see this modulation in burst activity.

“Detecting a periodicity provides an important constraint on the origin of the bursts and the activity cycles could argue against a precessing neutron star.”

Speaking about the incredible phenomenon, Duncan said: “This exciting discovery highlights how little we know about the origin of FRBs.

“Further observations of a larger number of FRBs will be needed in order to obtain a clearer picture about these periodic sources and elucidate their origin.”

It’s been confirmed that FRB 121102 is only the second repeating source of FRBs to display such periodic activity.

The timescale for this cycle is almost 10 times longer than the 16-day periodicity exhibited by the first repeating source, dubbed FRB 180916.J10158+56, which was recently discovered by the CHIME telescope in Canada.