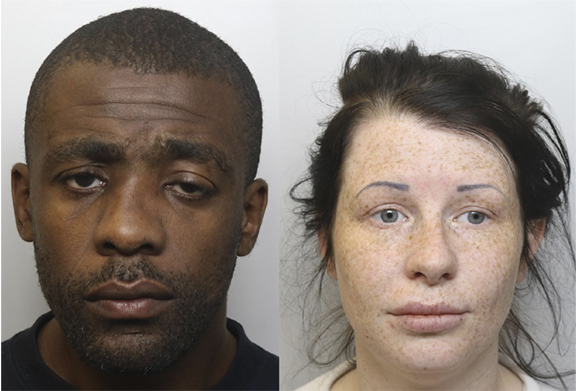 Two people involved in the supply of Class A drugs in Macclesfield and Styal prison have been jailed.

Anton Daniels, 36, and 31-year-old Tania Dewar, appeared at Chester Crown Court on Friday 11 September 2020, where they were sentenced to a total of 17-years and 6 months in prison.

Daniels, of Brooklands Road, Manchester, was sentenced to 10 years in prison after he admitted conspiracy to supply class A drugs, money laundering and conspiring to throw class A drugs into a prison.

Dewar, of Somerset Close, Macclesfield, was jailed for seven years and six months after she pleaded guilty to conspiracy to supply class A drugs and conspiring to throw class A drugs into a prison.

She was also convicted of possession with intent to supply class A drugs (Heroin and Cocaine), in connection with a separate case.

The pair had known each other for a number of years, as Dewar was believed to be selling drugs for Daniels in the Macclesfield and Peterhead areas.

Dewar was arrested in January 2020, in connection with a separate case relating to the supply of Class A drugs in Macclesfield.

She was subsequently remanded in custody at Styal Prison, meaning that she was unable to sell drugs for Daniels in Macclesfield.

However, the pair didn’t let the setback stop their activities, and instead Daniels used Dewar as his way in to Styal Prison.

Between 16 January 2020 and 9 February 2020 Daniels threw several parcels over the walls of the prison, which were then collected by Dewar and sold to fellow prisoners.

Their actions came to light on 12 February 2020 when Daniels was stopped by officers as he drove into the Wilmslow area.

Within his car officers recovered two mobile phones along with more than £400 cash.

Daniels was unable to account for where the cash had come from and he was arrested on suspicion of being concerned in the supply of class A drugs.

During a subsequent search of his home in Manchester officers recovered assets belonging to Daniels with an estimated value of more than £100,000.

They also found cell site data which showed Daniels had visited the prison on a number of occasions.

Following their sentencing, Detective Constable James Podmore, said: “This is a fantastic result and it truly goes to show the value of the police stop and search powers.

“As a result of a regular police stop check, and the subsequent investigation by the team here at Macclesfield, two people involved in supply of Class A drugs have been removed from the streets of Cheshire.

“Both Daniels and Dewar were clearly established dealers responsible for the supply of illegal drugs in the Macclesfield area.

“Even when Dewer was remanded in custody, the pair continued their illegal activities, targeting some of the most vulnerable people in our communities at the lowest times of their lives.

“Thankfully, the pair are now facing a significant period of time behind bars.”