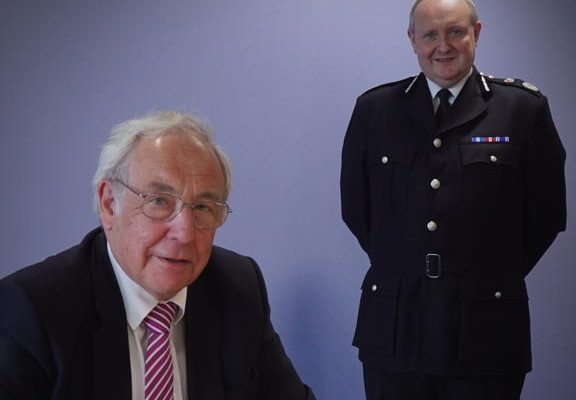 John Dwyer has started in the role as Cheshire’s Police and Crime Commissioner following his election victory.

Mr Dwyer was declared as the county’s Police and Crime Commissioner by Police Area Returning Officer (PARO) Halton Borough Council Chief Executive David Parr at the election count on Saturday (8 May) following the elections on Thursday 6 May.

He has taken on the role for the next three years. The term of office is normally four years but it has been reduced to three after the elections were postponed from May 2020 due to the coronavirus pandemic.

He previously held the same post between 2012 and 2016, in which time he oversaw ‘outstanding’ approval ratings for Cheshire Constabulary.

Prior to this, he retired as Assistant Chief Constable (ACC) in Cheshire after a 30 year career which started in Nottinghamshire, followed by a transfer to the West Midlands as a Chief Inspector and finally to Cheshire as ACC.

John’s role will be to be the voice of local people in policing and he will do this by holding the Chief Constable to account, setting the police budget and commissioning services for victims of crime and to prevent crime.

He said: “I am honoured that Cheshire residents have put their trust in me to be the next Police and Crime Commissioner and I’m excited to return to the role.

“Cheshire Constabulary is an excellent force with high performing officers, staff and volunteers who are committed to keeping our communities safe. I want to work with the Chief Constable over the next three years to support Cheshire to achieve ‘outstanding’ approval ratings from Her Majesty’s Inspectorate of Constabularies and Fire and Rescue Service (HMICFRS).

“I’ll hold the Chief Constable to account to reduce the amount of crime being committed and to increase the number of crimes detected. I’ll also be asking him to develop strategies to address key issues in our communities including anti-social behaviour and rural crime.

“I know that police visibility is important to Cheshire residents and over the coming years I am committed to recruiting 240 more frontline police officers, taking our establishment to 2,320 by 2024.

“Ensuring the most vulnerable people in our society are protected is also a key priority and I will be working with victims of crime to understand their needs and I will commission services which support them.

“I will also be listening to our communities, businesses and partners to ensure their voices are reflected in the decisions I make on policing and crime. I am looking forward to getting out and meeting our communities in the coming weeks and months as Covid restrictions are lifted.”

Chief Constable Mark Roberts added: “I am looking forward to working with John to keep the public of Cheshire even safer.

“Cheshire is a good force already and from working with John previously, I know we share the ambition to be outstanding.”