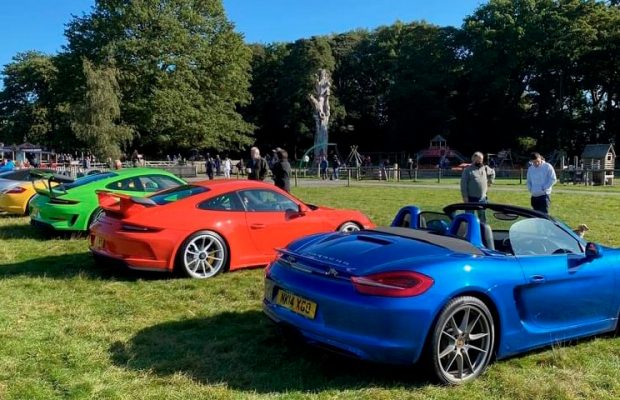 Owners and fans of Porsche cars across the north west have pledged to make The Christie in Macclesfield their charity of the year to turbo-boost funds.

The Christie at Macclesfield will provide care for around 1,500 existing cancer patients a year from Cheshire, the High Peak area of Derbyshire and parts of north Staffordshire.

Porsche Club GB has around 1,200 members throughout the north west, and donated £1,200 to The Christie charity in December last year.

Matt Staines, a property developer from Delamere, is one of the hundreds of members who have been touched by cancer after his wife Jeanie tragically died in July 2019 as a result of an undiagnosed brain tumour.

Matt’s mum Adrienne, from Handforth, battled cancer shortly after Matt was born and then had thyroid cancer years later.

She was treated at The Christie in 2014, receiving radiation therapy, which meant spending a week in a specialist lead-lined room after the treatment.

She has been fit and well since.

Matt said: “I’m just one of many members of the club who have had their lives touched by cancer, some have had cancer themselves and others have had family and friends who have been affected.

“But we all know that by supporting The Christie we are doing something positive for cancer patients and their families and that the new Christie at Macclesfield centre will make a massive difference.

“Losing Jeanie was a huge shock. Aside from some bad headaches, she was never diagnosed and we didn’t know she was ill, so sadly she was never given the chance to be treated.

“Jeanie was a very likeable and memorable woman. She was gentle and caring and also professionally very successful.

“I’ve been a member of Porsche Club GB for five years, becoming the regional organiser for the region since the start of the year and it is my way of giving something back.

“When I lost Jeanie, I got a huge amount of support and help from other members of the club and it really helped me get through it.”

Louise Dawson from The Christie charity said: “We’re delighted to be supported by the Porsche Club GB North West throughout 2021 and look forward to seeing the exciting and unique ways the club will be raising funds for The Christie at Macclesfield over the coming months.

“Our sincere thanks go out to Matt and all the members of the club for supporting us so generously.”

To find out more about the Porsche Club North West please visit porscheclubgb.com/regions-registers/regions/north-west/north-west.

To support The Christie at Macclesfield fundraising appeal and find out more about this vital project please visit christies.org/macclesfield.