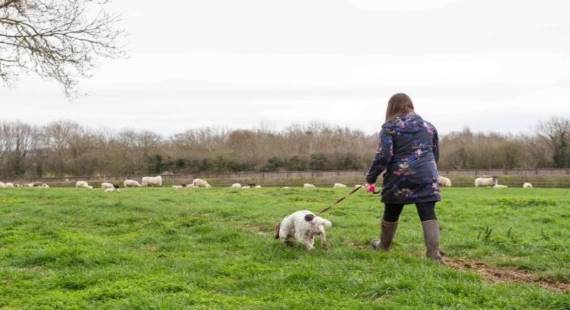 Cheshire East Council is calling for dog owners to respect the countryside in response to dog attacks on cattle in the borough.

Lockdown has seen an increase in dog ownership as people connect with new companions, but there has been an unfortunate downside – an increase in attacks on farm animals when dogs are let off leads in our borough’s beautiful countryside.

A dog attacked Longhorn cattle at Teggs Nose, Macclesfield recently, which caused great distress to the animals and also to local people, who witnessed what happened.

Six metres of drystone wall topped with barbed wire was demolished by the cattle as they tried to get away from the dog, at which point most of them received multiple lacerations from the barbed wire and stones.

The UK’s leading rural insurer,  NFU Mutual, recently revealed the estimated cost of dog attacks on farm animals in the first quarter of 2021 rose by a staggering 50 per cent. A surge in lockdown pets and countryside visits, along with a lack of awareness about how dogs will behave around farm animals are believed to be driving the rise. There are growing concerns that out of control and escaped pets will continue to wreak havoc over the summer.

Councillor Mick Warren, chair of Cheshire East Council’s environment and communities committee, said: “For very understandable reasons there has been a huge increase in the number of people becoming pet owners in the last 15 months.

“With ownership comes responsibility though and I would like to urge all dog owners to remain in complete control of their pets when they are out enjoying our borough’s many beautiful nature spots. Please keep your dog on a lead when anywhere near livestock.”

Rebecca Davidson, rural affairs specialist at  NFU Mutual, said: “ NFU Mutual’s latest figures confirm the harrowing reports coming in from across the UK of livestock being horrifically injured and killed by out of control dogs. The suffering to animals and the anxiety for farmers could be easily prevented if people kept their dogs on a lead when out in the countryside.”

The insurer reported that numbers started to rise sharply last year when farm animals worth an estimated £1.3m were savaged by dogs – an increase of more than ten per cent on 2019.

According to  NFU Mutual research with more than 1,200 dog owners, 88 per cent of people say they now walk their dog in the countryside. While 64 per cent say they let their dog run free off the lead – half admit their pet doesn’t always come back when called.

For advice on how to enjoy the countryside with your dog responsibly, please visit the government’s countryside code advice for visitors.