New speed cameras for ‘The Cat’ 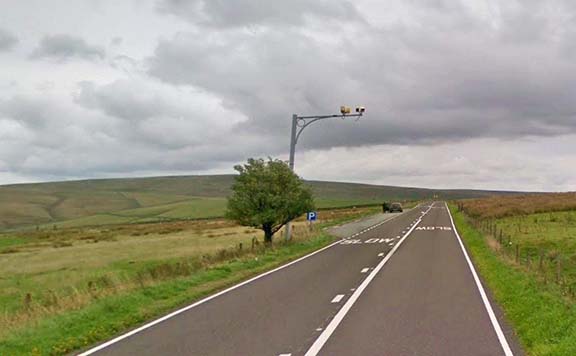 New speed cameras and safety measures costing £2.49 million are being installed on the Macclesfield to Buxton A537 ‘Cat & Fiddle’ road.

Despite several millions of pounds being spent installing the existing cameras some ten years ago, reducing the speed limit to 50 mph, ’The Cat’ retains it’s reputation as one of the regions worst accident blackspots.

Ilovemacc suggested, when the original cameras were installed, that the road’s reputation for accidents had more to do with poor driving standards than speeding drivers or motorcycle riders.

Chris Hindle, Cheshire East Head of Infrastructure, told Cheshire East Council’s Highways and Transport committee that the scheme was essentially to replace the existing cameras which are now 10 years old and had been very successful in reducing the casualty numbers.

Mr Hindle said: “The upgraded technology will allow the system to operate at night and in poor visibility conditions.

“Plus some engineering measures, safety treatment, safety barrier replacement and new safety barriers to address the causes of the incidents we’ve experienced in that location.”

Cllr Don Stockton (Wilmslow Lacey Green, Con) said: “I know you can’t come to a figure on how much it costs to save a life, so if this 2.49m saves one life then we would say that was worth it.

“However there has be a thought process in there and there has to be balances, because you could spend that money on any number of things that might save lives.

“You’ve assured us all this will save lives, but I just wondered what that balance was and, in terms of return on the investment, what is that return?

“I’m just looking at the balance of where you could have spent the money rather than where it has been spent, and whether it will save the most lives where it’s been spent.”

Mr Hindle replied a full business case was submitted to the DfT to justify the investment and ‘all the benefits from this scheme are translated into pound notes and that is used by the DfT to assess the return on their investment’.

Middlewich councillor Mike Hunter (Lab) said: “This is a bit of a no-brainer isn’t it? This is absolutely one of the worst roads in our area, not just for the people that live in and around Sutton and Macclesfield but also for the great amount of visitors that use that road as tourists.

“We need to support it and save lives. We know that the camera system that’s in there now has saved a great deal of lives but it is outdated, it is coming to the end of its life, it does need replacing.

“Fines are not the catalyst for this. Road safety and, like Cllr Stockton said, it’s people’s lives that matter.”

The committee unanimously agreed the recommendations to approve the delivery of the road safety scheme through the highway service contract and authorised the director of infrastructure and highways, in consultation with the committee chair, to take all necessary actions to implement the scheme using the funding provided by the Department for Transport.

Share this...
Related Items
← Previous Story Have your say on how Cheshire is policed
Next Story → Bosley Annual Tug of War Competition