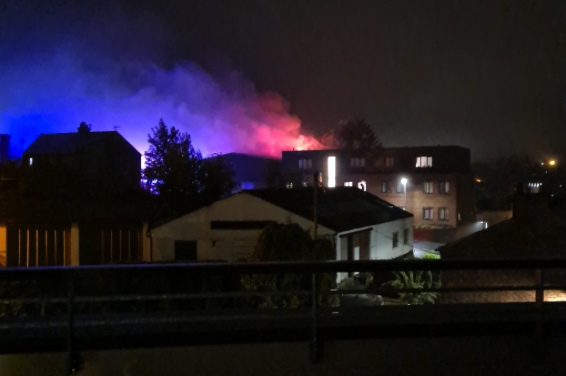 The Calamine Street warehouse, which was destroyed by fire in age early hours of 17 August, was found to be a cannabis factory

Police are appealing for witnesses and video footage following a large fire in Calamine Street – later investigations have proved the site to have been used as a cannabis farm and it’s believed that the fire was caused by an electricity overload.

Shortly before 4 am on Tuesday 17 August emergency services were called to reports of a fire in a former kitchen warehouse building on Calamine Street, off Windmill Street, in Macclesfield.

Two fire engines from Macclesfield were dispatched and an additional four fire engines from Warrington, Penketh, Widnes and Bollington were called to the scene to assist with the incident, along with an aerial platform from Lymm.

A joint investigation into cause of the fire has now been launched and Cheshire Police would like to hear from anyone with any information which may help with their enquiries.

Detective Sergeant Robert McCubbin, of Macclesfield Local Policing Unit, said: “This investigation is in its early stages and at the current time it’s too soon to say what the exact cause was.

“The warehouse involved is located at the junction of Calamine Street and Windmill Street and as part of our enquiries we are keen to hear from anyone who was in the area who believes they may have witnessed anything suspicious.

“The same goes for anyone with any CCTV or dashcam footage which may aid our investigation.”

Anyone with any information in relation to the incident is asked to call Cheshire Police on 101, quoting IML 1063059 or give the details via https://www.cheshire.police.uk/ro/report.

Alternatively, information can be reported anonymously, via Crimestoppers, on 0800 555 111.