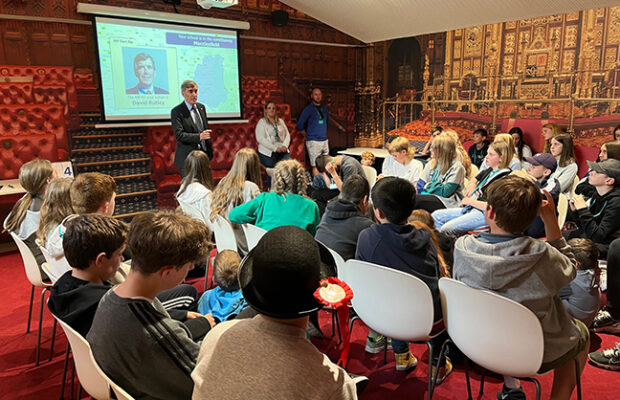 For the first time since the pandemic started, local MP, David Rutley, welcomed over 30 students from The Fallibroome Academy for a tour of the Houses of Parliament.

Prior to David meeting the group, students had a guided tour of the House of Commons and House of Lords, followed by a workshop in the Parliamentary Education Centre where they participated in themed workshops and exercises to expand their knowledge of Parliamentary procedure and the history of Parliament.

David met with the large group of students in the Parliament Education Centre and spoke with them about his work as an MP representing Macclesfield in Parliament. He also highlighted the work he is doing locally, such as supporting initiatives to regenerate Macclesfield town centre and the Poynton Relief Road.

David also spoke about his role as a Minister at the Department for Work & Pensions and outlined the work that is being done to help support low-income households and vulnerable people facing cost of living challenges. He then took part in a question-and-answer session with the students, answering a range of thoughtful questions, including on climate change and on young people’s engagement in our democratic institutions.

David is always pleased to meet with local schools, including in Parliament. Any local schools interested in visiting the Houses of Parliament can find more information on arranging a visit at: www.parliament.uk/education.