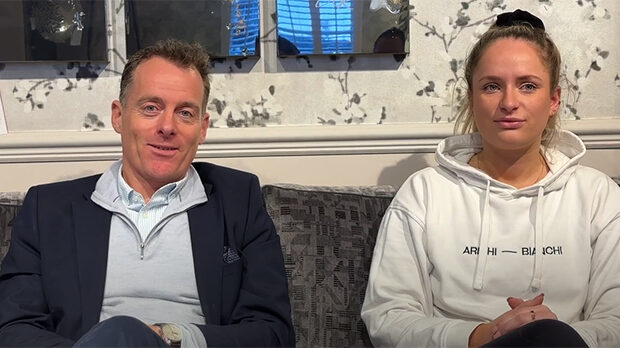 Some might say it’s a match made in heaven as two of Macclesfield’s most iconic and best-loved brands Arighi Bianchi and Macclesfield FC kick-off a new three-season partnership.

Furniture and furnishings retailer Arighi Bianchi, whose famous five-floor store building has been in the town for more than 160 years, is supporting the Club with a branding deal that includes billboard and digital advertising in and around the Leasing.com Stadium.

Arighi Bianchi is a long-term supporter of its local Football Club and has already been instrumental in refurbishing Bar Twenty Seven’s prestigious facilities.

Nick Bianchi was invited to be an Ambassador of Macclesfield FC as it re-emerged under the ownership of Rob Smethurst and Robbie Savage just over two years ago and there can be no doubt that The Silkmen are enjoying huge amounts of success both on and off the pitch.

Commenting on the new partnership, Nick Bianchi said: “Whilst our family business has supported the Club for many years, I personally have been a long-standing Club Ambassador and Macclesfield FC fan (previously Macclesfield Town).

“I’m extremely proud to be extending the relationship between Arighi and Macclesfield FC as the Club continues to prosper – not only down to the strength of both the Men’s and Women’s First Team success – but as an organisation that’s nurturing youngsters through its Junior Academy.

“The Club is doing a brilliant job to inspire and train new talent aiming for careers on the pitch.

“Macclesfield FC is a huge part of our local community and has been on a tremendous journey over the past couple of years thanks to Rob, Robbie and the whole team that gives their all to put Macclesfield FC on the map.

“As the place for people to achieve their interior goals in the area, we are of course the ideal partner!

“We’re extremely excited by this new partnership and look forward to celebrating with the Club as it continues to go from strength to strength.”

Max Bardsley-Rowe, Macclesfield FC Commercial and Sponsorship Manager, added to this by stating: “Everyone at Macclesfield FC is delighted that we have been able to secure this poignant sponsorship deal with Arighi Bianchi.

“As an historic and prestigious part of the Macclesfield fabric, we are truly humbled that Arighi Bianchi has joined our encapsulating journey.

“Not only that, but it is fantastic that we have been able to negotiate a three-season partnership that will see Arighi Bianchi’s iconic brand at the centre of our Club.

“I would like to reserve special thanks for Director Nick Bianchi, who has not only been instrumental in this deal – but also has blue blood running through his veins.

“I can’t wait to see this incredible partnership flourish over the course of the next three seasons.

“Arighi Bianchi’s iconic branding will feature outside the ground with billboards on the front strip of the Stadium’s main entrance – as well as within our digital interview board, website and award-winning programme.”