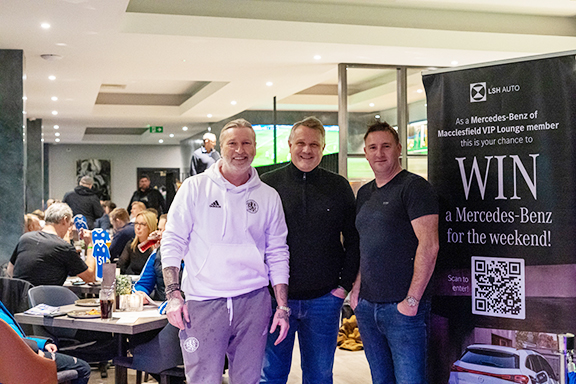 Macclesfield Mercedes dealership, LSH Auto, is the exclusive sponsor of the VIP lounge at Macclesfield FC.

New for this season, the Mercedes-Benz of Macclesfield VIP Lounge is already proving popular with fans and guests since it opened its doors.

LSH Auto and its local dealership Mercedes-Benz of Macclesfield, also continue as the ‘Official Van & Car Supplier’ to Macclesfield FC for the coming season.

LSH Auto is already a key sponsor of the Macclesfield FC men’s and women’s teams and as such has its logo featured on the arm of the shirts. The new deal has seen this extended to shirt sponsorship of the BTEC Academy Kit and U7’s, U8’s, U10’s, U11’s, U15’s and U16’s.

Martyn Webb, Managing Director of LSH Auto, said: “It’s important to us to support the younger players as well as the first teams. Last season, the Under 15s and Under 16s won the league championship, and the Under 16s won the Cheshire County Cup, the Primary Cup and the Manchester FC County Cup, so the youth programme at Macclesfield FC is clearly working well.”

Macclesfield FC’s Director of Football, Robbie Savage said: “I’m delighted that a company as prestigious as LSH Auto has chosen to extend its presence here at the Leasing.com stadium, with the sponsorship of the VIP lounge, Junior and BTEC academy kits. As one of our most valued partners, I look forward to building a long-standing relationship with LSH Auto and I’m excited to see some of our plans come to life over the next few weeks and months.

Share this...
Related Items
← Previous Story Award for Macclesfield’s Just Drop In
Next Story → Man charged for failing to stop after collision with child