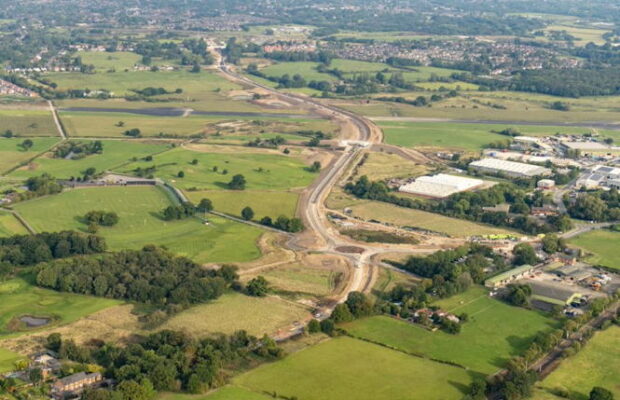 Parts of the A523 London Road and Street Lane will see temporary closures to facilitate works on the Poynton Relief Road project.

Street Lane will be closed 24 hours a day at its junction with the A523 London Road from Monday 28 November, for about four weeks.

The A523 London Road will be closed overnight, between 8pm and 6am, from Adlington Business Park and just beyond the new Adlington roundabout from Monday 5 December, for about three weeks.

A signed diversion route will be in place and access will be maintained for non-motorists, local residents and local businesses – including the golf centre, Travelodge and Starbucks.

The new £53m Poynton Relief Road is to be named after the local legendary aircraft engineer who designed the Lancaster bomber – of ‘Dam Busters’ fame.

The 3km route, which is under construction, will be named Roy Chadwick Way in honour of the pioneering Woodford-based Avro design engineer.

Chadwick is most famous for designing the Avro Lancaster, the most heavily used bomber for night raids during the Second World War.

A modified version of the Lancaster was used in a daring May 1943 raid using ‘bouncing bombs’ to destroy key Ruhr dams and flood huge areas of the German war economy. The raid was immortalised in the epic 1955 film The Dam Busters, starring Richard Todd.

Roy Chadwick Way, when opened, is intended to relieve Poynton and neighbouring areas of high traffic volumes and and open up employment land. It is being developed by Cheshire East Council, working in partnership with Stockport Council and delivered by civil engineering contractors GRAHAM.

Chadwick died on 23 August 1947, along with three other crew members, in a crash during take-off from Woodford aerodrome in a prototype Avro Tudor 2 G-AGSU. The accident was due to an error in overnight servicing of the steering controls.

The road will include two overbridge crossings for use by walkers, cyclists and farm vehicles and a 3.5m-wide combined cycle and footway, which will run beside the length of the route in the western verge.

Due to some issues with underground utilities, the relief road is now expected to open in early spring 2023. The council thanks residents and road users for their continued understanding.